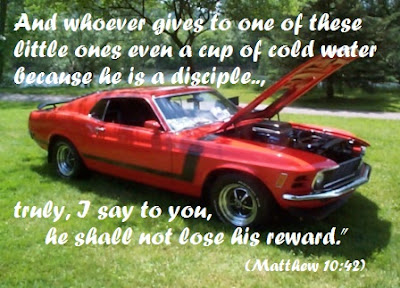 EVERY ONCE in a while we encounter someone who vibrates to our own frequency like a smooth hum coming from a high winding race car. Of such tone was my first meeting with Bud Groner. At the time, Bud had been the owner and operator of Langhorne Speed Shop, located in Langhorne, PA for many years. There I had met him over the counter as I purchased a set of four “AP” deep-dish aluminum magnesium wheels. The wheels were bought to dress up the tires of my 429 V-8 powered ‘70 Ford Torino.

Though Bud was about 20 years my senior, during our talk about the Torino we connected over several common factors. Our mutual love of things automotive jelled together when he discovered that I taught auto repair classes at the Philco-Ford Technical School in a nearby Philadelphia suburb. Because of that fact, I soon was given a tour of the speed shop and taken to lunch. During that lunch, we shared the wins and woes of working on Ford high performance engines.

Later, during the coming months, our friendship flourished even more as I found that he owned a Piper Cherokee aircraft, and I was by happenstance taking flying lessons. Then during the early 70s, my school changed owners. That learning institution became Pennco Technical School and moved to Bristol, PA, locating my classroom work place even closer to the speed shop. It was so close and convenient that Bud showed up there one day just after my class had been dismissed. He said to me from the classroom doorway, “I’ve got something to show you.”

Taking me out alongside the building, he revealed his brand new Volkswagen Sirocco. At first I thought that it looked a bit like the Bricklin sports cars that I’d worked on at a Ford dealer, then I thought it may be a poorly done DeLorean copy. But no.., his low and sleek silver VW was radically different. The rear-wheel-drive VW carried a 5-cylinder engine beneath the hood.

Indeed! Seemingly designed by Audi engineering, the power pulses of the uneven numbered engine firing were balanced by a counter rotating balance shaft spinning within the power plant.

However, after much talking over the ersatz innovations with Bud… I found out the real reason for his showing me, wasn’t about the pride of a new and unique car. You see, Bud was a true entrepreneur.

Bud changed the tone of his voice to one of more serious note. He said, “I’d like your help with a project.”

With that said, he laid out a cardboard box that said, “Water Injection”.

“I want to try this kit out on this VW.” 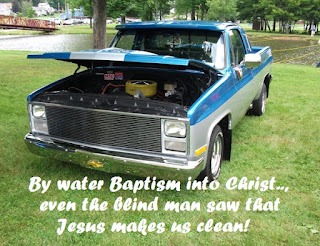 I said, “Are you serious? You’re nuts! That kit is garbage.”

He said, “Look, this is my wife’s car. And even with the turbocharger it runs like a raped ape in low gears, but the power wheezes out in higher. I think this water injection can be a cheap way to cure the lag. If it works, I’m going to sell the kits at the shop.”

Now, knowing me to be rather conservative in theological matters today... many might say that’d be the end of the conversation. But not so… in those days my mechanical curiosities got the best of me. We installed the kit.

Basically, the kit contained a reservoir, a water hose and various sized nozzles. The unit was powered by an electrical water pump, its wiring and a switch. After wading through instructions... made in at least four languages, we did the installation in about an hour, The pump would spray a water and alcohol mix (we used windshield washer fluid) into the engine’s air intake. The kit’s spray nozzle located in the ductwork we’d modified between the air cleaner and the throttle plate.

I said, “Let’s start with the smallest nozzle and work upward in size until there’s no acceleration improvement.”

Bud, with a grin that could be used in an ad for a mental institution… said, “No… let’s go BIG! Thus we installed the largest water jet.

We took the car out on the newest portion of closed highway construction of what is now interstate I-95. Bud wound the five banger up, and as he hit high gear I pressed the water injection switch.

For a moment, the engine sounded like a screaming Audi race car attacking a Nuremberg straight-away. We took off… and then… blurrrr… we started to go slower. I checked the rear view mirror and saw a cloud of steam trailing us like a white dragon’s breath. I quickly released the button. However, the steam kept pouring out of the exhaust for a moment of two. But eventually the engine started to run better. Finally, when my breath returned to my body… I heard Bud say, “I think we need a smaller jet.”

After returning with spirits dampened into the school shop, and making adjustments in smaller jet sizes, we found that a small addition of water to the combustion mix did improve the sinfully lagging engine performance. However, just how much damage was done to the Sirocco was a point of discussion. I asked, “Was it a water baptism unto death?” 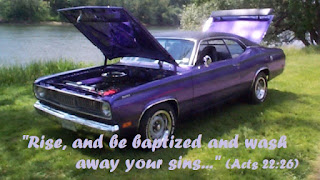 Today, years after my friend Bud has passed from this life… all I offer to you is that he traded that VW within a month after our experimental runs.

Now I thought about this adventurous side of our friendship as I think about the Pentecost season. The story seems to fit… at least a little bit. You see… the VW had five cylinders… and Pentecost is the Hebrew feast of fifty days. Long ago, it also happened that Pentecost was the birthday of the Christian Church. At that time, Jesus’ disciples received the fire of the Holy Spirit. The Spirit entered into them like water into combustion chambers, just so that they would make an all out run to express the faith given to them.

Tongues of fire spread out from that Pentecost celebration and joined with the waters of baptism to speedily make new adherents to the faith. The two elements of faith, fire and water, then produced an evangelical power beyond all human comprehension. Together they transported Christianity as we inherited eternal life and the Good News traveled across the globe faster than an entrepreneurial man can drive a juiced VW. Even now, I consider whether it is any wonder that the first automobile invented was powered by steam.

So it was, and so it is forevermore.

Please be invited to watch this ministry video...

May the peace of God that surpasses all human understanding keep your hearts and minds in Christ Jesus, our Lord.  Amen!