Sometimes the Christian Church needs to spend less effort in deciding what human being is going to be a leader, and be praying about those who do not yet know our Lord...

If you've heard, you should know the Truth

Buck for a Buick! 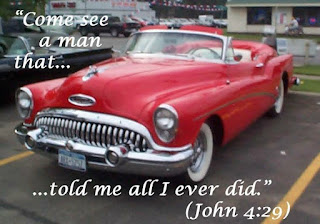 OUR CHARACTER is inherited by those that come long after us. From the beginning then, we need to work diligently in teaching needed foundations to those who follow us on the roads of life.
As a child born early in the years during World War 2, I sat making airplanes out of cigar boxes and brad nails while perched on a stone wall in front of my grandfather’s house. I waited each day for my father during the early mornings. I missed his laugh. He had been gone for far too long. I barely remembered his face as he served then with the US Navy in the Pacific.
Many men in our family served back then. I missed them all… including my Uncle Carl. He was a very special uncle. I sat one day on my perch on the wall and admired that he’d driven home in a very special car. Uncle Carl had come home for several weeks on leave from the war in Europe. During his leave time, he had taken his car from storage and parked that bright yellow ’40 Buick convertible smack in front of my grandfather’s house on Shawnee Ave. in Plymouth, PA.
The car glistened with its white soft top all ready and waiting to fall far back… so a young boy could stand too daringly up high... venturing firmly to face into the wind. Thus I sat on the wall guarding the wide-whitewall tires jealously, so that Skippy, our fox terrier, would not be able to lift his leg on them. By doing so I thought that he, heaven forbid, would stain the wide whitewalls permanently to match the pale yellow paint.
I waited patiently on that wall. I waited building airplanes as I could until the mid-morning hours saw the sun rise high. My patience began to fade especially when I thought of riding in my Jodhpur shorts on the car’s hot, dark brown leather seats. I practiced riding with legs lifted, saying the name of the car. However, in my youth I kept saying “Buck” instead of “Buick”.
My glee arose, however, when my uncle stepped out on the porch dressed in his army uniform. He grabbed up our Skippy and called for me to load up in the front passenger seat. Oh, the brightness of it all! A ride in the Buck was at hand. Even today I remember that scene humorously when I consider the matter. For you see… little did I know that the terrier and I were both riding as bait.., for uncle trolled through nearby streets looking for pretty girls. 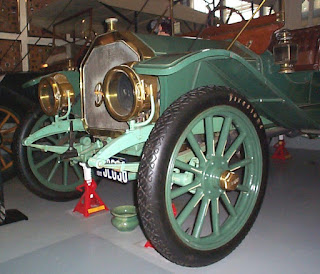 Tradition has its followers. Indeed, Buick automobiles were part of my household for several generations. You see, those cars were truly American. Buick holds the oldest active American marque for an automobile. The original Buick Motor Company was the cornerstone for General Motors in 1908. My grandfather had himself worked many years for a man who drove a fancy green roadster, one of the first generation of Buick cars in town. An elder in the Welsh Baptist Church down the street from the wall where I sat making airplanes as a boy, he was a man who had a faithful employee who took care of the car. A slightly-injured miner who’d retired next door to us, earned extra income as he washed the car regularly and polished the brass headlamps once each week. Unfortunately, having persistently leaked oil a bit because gasket technology was also in its infancy, the car eventually was replaced by a bigger, black four-door Buick Special. 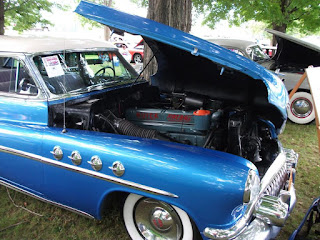 I remember that in the early ‘50s, after that war was over… the stone wall on which I’d sat echoed smooth sounds of many a Buick straight-eight cylinder engine, powering through a silent Dyna-flow automatic transmission. These were engineered far beyond the prideful boast of the first turn signals to ever to grace a car.
The war was indeed over and cars became bigger. Returning warriors like my father had come home. Families whose men found worthy work could afford new cars and houses, and were soon motoring to the Welsh Baptist church in large cars like the Buick. 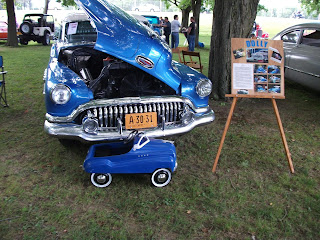 Buick was a car that seemed to mean success. That car spelled upper-middle class. It meant that a family was growing. My father said that you could usually tell the income, family prodigy and social pride of a man based on whether he drove a Chevy, Oldsmobile, Pontiac, Buick or Cadillac… and also where he sat in church on any Sunday morning. As well, he then warned that the quest for power and position are often the roots of prideful sin.
Indeed power was hard at work for Buick. You could no longer get a new inline 8-cylinder Buick after ‘53. The car maker dumped the sturdy straight eight, and topped a V-8 with a four-barrel carburetor.
The combo took its place beneath all hoods of newer models. Buick pushed the engine size to greater heights, as the 401 c.i.d. V-8 engine entered the struggle of engine vss brakes. A heavy weight in both pomp and circumstance, the late ‘50s Buick needed big wheels… and big, finned drum brakes to curb the engine power. Buick’s high performance models were soon tried out on the test track as prototypes from the division vied for attention against the Corvette. Finally, during the ‘70s, Buick got very radical by putting turbocharged V-6 power beneath the Regal hood. Painted in somber and threatening black, these cars boldly cast stones hard against the rock engineering wall that had believed that bigger was always better.
I remember driving one of those dark beasts when I was still attending seminary part-time. The magazine for which I worked had garnered the car for a photography session. As I stepped on the accelerator pedal, the engine barely squeaked the tires, and then went “Whoosh”. I found out rapidly that a new generation had been born. The wind that had blown in a young man’s hair during WW2… had been engineered into a small engine in order to blow the mind. 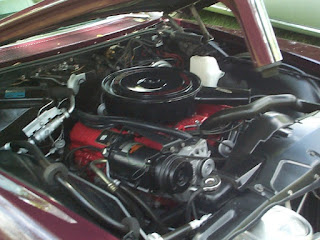 Now, both Buck and I have traveled a far way it seems. For as I accepted the graceful privilege of being a pastor within my Lord’s church, the dust raised by generations of family and cars carried me into the auditorium of the University of Rhode Island. And oddly while I knelt... like the sound of a big block Buick 455 V-8, the "whoosh" began faintly, almost unheard during many verses of “Amazing Grace” as sung by a large choir. I soon could hear no less. I understood then the gift of the Spirit of Pentecost as spoken in the biblical book of Acts.
Was it a trick of my excited mind? In retrospect I don’t believe so. For weeks later, a parishioner from Stockholm, Maine gave me a picture that was taken at my ordination. Within it I was pictured as kneeling alongside another ordination candidate. She has become a good friend over the years. We were both ordained on steps that made a rock wall seem soft. What seemed to be a photographic anomaly... was present above us in the picture. Flames are clearly seen. Seeing the photo, some have said it was a defect in the self-developing film. Others have said it was a reflection. I rather think that, “Whoosh” said the Holy Spirit. 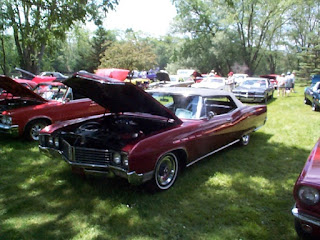 As I consider this now, though a few generations have passed since my days of making airplanes on a rock wall, the sound I heard repeats that which I said loudly to chase our dog from lifting his leg on the whitewalls. “Whoosh” is yet said as the Spirit comes to us in baptism. That sound, often unheard by sinful ears, is divinely spoken to chase away evil demons. Its echoes speak softly to us at the communion rail when God is forgiving us our sinful ways of war and broken families.
“Whoosh” is the sound that I feel which marks when God, through his Son... is preserving us… echoing across the ages in faith from one Christian generation to another. Thanks be to God for all that is in that wondrous sound... for especially today I thank our Creator… for loving uncles and old Buick cars that sat before me when I was yet a very lonely child.

HERE WE PRESENT you with an online opportunity to view and participate in key portions of our worship experience. We offer this to you especially for the sake of those who are home bound, or temporarily cannot attend a worship celebration at their home church. In no way should this be taken as a replacement for regular Christian worship in a traditional faith community... for there you rightly worship God, are supported and offer the love of God to others.

To view our video, click on the screen arrow below. Once the video begins, you can click on bottom right of the video screen to obtain the YouTube call out. Click on that call out if you wish to enable larger, or full screen ability.

May the Lord Bless and Keep You!