Who is President, Emperor, or King?

AS WE approach the end of the church liturgical year, preparations are made in many congregations to close out the calendar with a celebration. This Sunday comes upon as our traditional way to remind everyone present about who is Lord of Lords.. Hear this "Lesson from the Laundry"...

Jesus Christ is indeed King of kings and Lord of lords. By the power of the Holy Spirit it is thus that we gather and worship on Christ the King Sunday. Let us especially strive to do so then... and give thanks to the Creator of heaven and earth. Please be welcomed to explore the web site of the North American Lutheran Church (NALC) wherein you may find a congregation near you.

By the power of the Holy Spirit, may the Peace of God that surpasses all human understanding keep your hearts and minds in Christ Jesus, Our Lord.
Posted by TeeJay at 3:20 PM No comments:

The Church and Governmental Politics


DEFINED AS expression of a person or entity’s position, whether called north or south, east or west, positive or negative, conservative or liberal.., personal politics becomes a sociological factor that is ideally found in any human society. In this vein, given that we are constitutionally guaranteed freedom of speech, we in the United States of America have a right and responsibility to voice our opinion in the public square. This is most evident in our free, Constitutional-guaranteed ability to cast votes in any public election.
Amid the fray, however, comes instances where public statements are needed. This was accomplished by congregation member and Viet-Nam veteran Lenny Anderson, and myself... as pictured below. 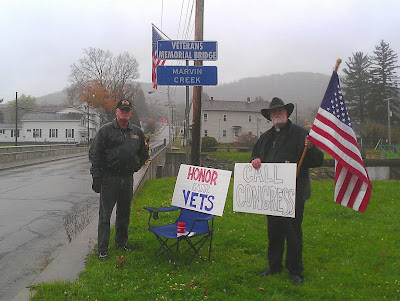