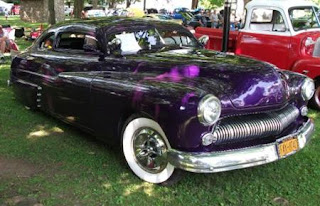 AFTERNOON light played tricks with my elderly eyes as I strolled through the late summer fair. As part of the car show in a nearby small village, I saw a really nice ‘49 Mercury. The beauty sat in some partial shade created by the sun's rays filtering through the trees.
However, the car's subtle paint tones wandered according to the changing light that flickered beneath the leaves. This caused me to have some trouble discerning the color. As a pastor, I thought at first it was like an Advent season’s violet candle. Another view made me think of possibly a Lenten purple clergy stole. No matter the color, however… I simply found that the car was indeed beautiful.
Styled quite a bit from the factory original, the two-door sedan's top was chopped. Its ride height was also lowered so that the car hugged the ground. I thought the height was just about perfect… low enough to look good… but high enough to drive in polite circles. The custom Mercury was very, very clean. De-chromed nicely, the body dated its builder as a mid-‘50s aficionado. Dual Appleton spot lights, dual engine exhausts, and quad bullet tail-lights told boldly its emphatic message. The car was an unapologetic ‘50s Saturday night cruiser. 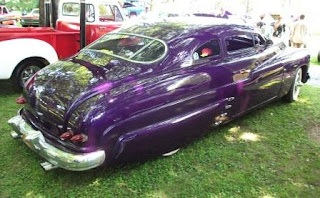 Knowing that a stock Mercury flathead V-8 had originally spun beneath the nosed hood, I mused somewhat about the prospects of its being high performance. Quite Trinitarian in my Christian theology… I wondered if three Stromberg, 2-barrel carburetors perched on top of the original 95 horsepower flathead V-8 engine.
Being occasionally radical of mind, however, I also daydreamed somewhat that just maybe… maybe… there would be an original Arden-Merc hidden in there. Serving up much power back in the day, that engine design originally fomented by Corvette pioneer Duntov was an overhead-valve-conversion (OHV) for flathead V-8 Ford engines. Designed mostly for marine use, the Merc’ conversion in later years had found its way into more than a few custom cars.
Rather an afterthought, Mercury began as a registered trademark of the Ford Motor Company, launched in 1938 by Edsel Ford, the son of Henry Ford. Edsel had originally marketed the vehicles between Ford’s regular, entry-level models and its luxury Lincoln cars. By this tradition, Mercury soon became an automotive brand well-known for one-upmanship.
The brand was named for a fleet-footed Greek god. The name "Mercury" is derived from the rapid messenger of the gods who was written of in Roman mythology. So in keeping with the ancient myth… during its early years the Mercury was especially known for a few tidy performance enhancements. The cars often possessed a few more inches of engine displacement, a higher compression ratio and throaty dual exhausts... all to make the speedy Merc’ a car to own.
The Mercury brand continued in production until 2011, when the badge was eventually phased out. In an austerity move common in that decade, FoMoCo refocused its marketing and engineering efforts. This is what will likely make an older Merc more valued as time rolls on.

Harder Find?
As a minister, I found it rather interesting that such planned reductionist trends in American car manufacturing paralleled the social natures of other human endeavors. For example, we historically know that many mercurial political powers leaned toward blending the rich diversity of the world’s ethnic populations into a more acceptable mash… somewhat like mixing the attributes of Ford and Mercury together. We know that in the last few decades these political progressives wanted to merge my own Christian beliefs among a myriad of other religions.
You see, the thinking of mechanical and social engineers changed just after the WWII era. Like updating from the old flathead Ford and Merc engine to overhead-valves in ’54 was key to gaining horsepower and mastery in the car business, so too our society was thrown into a new melting pot. Where once such tyrants as Adolf Hitler sought to purify themselves a master race by selectively breeding Aryan descendants... and eliminating persons or races they considered as undesirable… the new post-war social dynamic seemed to think that we races should forcibly be mixed together.
Today, using the tools of abortion... mass migration, loose border controls, and other jaded thoughts... work to manipulating the population. Their ideas reflect a “Throw them all into a pile, and control them" bias. This they hope will cause an social evolution into a progressively more serene and well-behaved world.
However, the only problem with this modern, progressive manufactured thinking is that while the principle may describe reasonable and cost-effective car making, it does not translate well toward the blending of the children of God. Where the political realm attempts to blend religions, the traditional Christian church vehemently disagrees.

Individual Customs!
You see, we Christians distinctly relate that each person is baptized as unique. Through the Holy Spirit our Lord Jesus saves us from futile universalistic thinking. God speaks and embraces our individuality. Our Lord knows our name! By this knowledge, we Christians find ourselves more unique than a ’49 Merc with purple paint job, spotlights and bubble skirts.
Don’t be fooled by any demonic voices that call for religious “diversity”. These fools hope that social upheaval over time will bring a homogenized peaceful, bubble that they can control. While we Christians surely welcome human diversity, we see this as a word describing a person’s race, ethnicity and nationality… but not our religion.
Please note that I believe that religious diversity is not a methodical long-term aim of the Christian church. While we accept the freedom of any person to claim allegiance to a particular religion, diversity is not our evangelical calling. We see that we are to be diverse as God’s individual children, but are called to witness as Christian in faith. Our witness declares the radical claim that Jesus shows the only Way to properly worship God. As our Lord Jesus said to his disciples..,

“Let not your hearts be troubled; believe in God, believe also in me. In my Father’s house are many rooms; if it were not so, would I have told you that I go to prepare a place for you? And when I go and prepare a place for you, I will come again and will take you to myself, that where I am you may be also. And you know the way where I am going.”
Thomas said to him, “Lord, we do not know where you are going; how can we know the way?” Jesus said to him, “I am the way, and the truth, and the life; no one comes to the Father, but by me. If you had known me, you would have known my Father also; henceforth you know him and have seen him.”  (John 14:1-7)

Consequently, just as we cannot duplicate the mystique of an old Mercury, no one has replicated those radical, scandalous words. By scriptural authority, Jesus made it clear to Christians that the social scientists are wrong. There is only one Way to get to heaven! 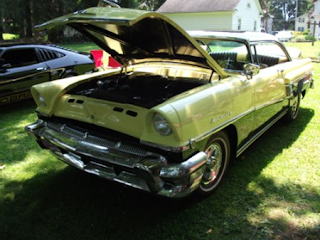 Consider this! Sin clings to humans like a rust spot eating away in the right-rear lower fender of a vintage ‘57 Mercury two-door hardtop. No matter what rust-proofing you use or what color is painted over that original bright yellow... the rot will one day show. The cure for our spiritual rot is to know that Jesus is the Way… the only Way. Jesus paid the penalty for our sins against God, and he is thus the only Way for us to be redeemed from decay.

We need to be reminded that this scriptural message shall not become obsolete like a Mercury Cougar. You remember the Cougar, don’t you? It was the ‘60s Mercury imitation of the Ford Mustang. While being the same in size as the popular Mustang, the grill of the Cougar retrieved the mustachioed-look of its 1947 ancestor. Yes, the Cougar snarled with the same engine selections of the Mustang, but a few extra dollars spent bought the owner a little more glamour. However, as owners found out, it still had some of the same sinfulness. Even while heavier beneath the sheet metal, the car still sported the same fuel tank explosion dangers of the Pinto, Maverick, and Mustang car lines. Hit in the rear, the Mercury Cougar could be a rocket on the highway to hell.  Thus the eventual demise of Mercury on the world automotive stage should be a sign for us. Mercury’s demise emphasizes that money cannot buy success in obtaining the best that God offers us freely through his Only Begotten Son. 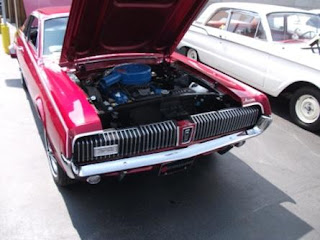 Parked Or Rolling?
You see, as chopped and lowered by sin we Christians find ourselves standing out among other sinners. God favors Christian car show strollers, for through Jesus Christ he reveals to us wandering fools that the world is a very dangerous place. Why we are so favored is not quite understood, but just know Jesus warned his disciples repeatedly that the world’s sparkle would disappear before his return. That is exactly what the final days of his earthly ministry demonstrated. Before his death upon the cross because of man’s unbridled quest for short-lived polish and sparkle, our Lord told his followers that in the world there were powers at work rightly to be feared. As the centuries rolled forward from the days of Roman Empire, many of his disciples were persecuted and killed.
Because of this ancient church history, we Christians should realize that we live in a world that has little parking space for us. We sit idling noisily in the staging lane like a high-performance 427 cid, OHV engine-equipped Mercury Comet. We seem ready to vault out onto the drag strip to proclaim our Lord as king of all.

Believers should always be running and ready, but not naive about what to expect from the world around us... a world flagged down by sin. Consider those Christians caught living in lands afflicted by terrorists. These find that chopping occurs not to the roof of a Mercury... but to the saintly heads of those committed Christians. This is evidence to all that today we still live in the same world that hung our Lord Jesus upon a cross.
Consequently, today we Christians must realize that any soul doing after-church wanderings on a Sunday afternoon is not to be hypnotically consumed by polished chrome, nor dazzled by sequentially-blinking Cougar taillights. We are to be wise in knowing that our faith shall endure and we need to express it openly. We are made secure in knowing above all that our Lord who has saved and preserves us... shall certainly return. Jesus Christ will come quickly… and when he does... his arrival shall be faster than the footfall of any faded Greek messenger. Thanks be to God!
If you enjoyed this article, go to Amazon.com to obtain our book by clicking on its image at the top right of this page. As well, we present you with an online opportunity to view and participate in key portions of our worship experience. We offer this to you for the sake of those who are home bound, or temporarily cannot attend a worship celebration at their home church. In no way should this be taken as a replacement for regular Christian worship in a traditional faith community... for there you rightly worship God, are supported and offer the love of God to others.

To view our video, click on the screen arrow below. Once the video begins, you can click on bottom right of the video screen to obtain the YouTube call out. Click on that call out if you wish to enable larger, or full screen ability.

May the Lord place his peace upon you and yours!
Posted by TeeJay at 8:15 PM No comments: