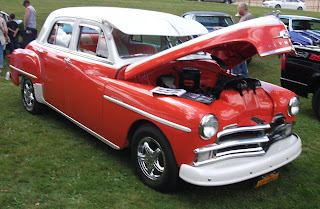 A STROLL through a car show last summer offered me views of a wide variety of tasteful vehicles. On a day of relaxation that I shared with my wife, our attendance was like a youthful visit to a local ice cream store. We found all sorts of wheeled delights; small and large, fast and slow, old and new, deep and bright. The vehicles at the show made me remember sights in a long-gone candy store located on the road near my elementary school.
This became especially so as we made our way through the throng of people attending, my mouth began water. I smelled food, and was getting hungry… and some of the cars likely reminded me of treats. First, a lowered all black, licorice-stick looking ’57 Ford hardtop complete with bubble fender skirts caught my eye. I had once owned a tasty just like it a long time past… in my more youthful days. Also a huge, green super-charged-gasser sporting big flames made me think of the spicy hot sausages I used to get at Greenwood Dairy in Langhorne, PA... eaten just before ordering the Pig’s Dinner Sundae. However, none of those delights spoke to my gastronomic self like an old, four-door ’49 Plymouth.
Though somewhat odd for my taste in classic cars, the old Mopar sedan caught my hungry eye. The car had a distinct family-style. It carried a dated, sweet protective windshield visor and four side window rain shields.
I ask myself now why I even considered the car, “Who would be that interested in a common family-style, four door with a flat-head, six-cylinder engine?” It seemed that the car was all stock… but nicely restored and very clean. The car, somewhat feminine for my automotive tastes… sat somewhat demure in the midst of many high powered, beautifully-customized automotive samples. I thought about that particular car’s attraction as I powered up my camera. After a few photos, it hit me. The car was just pretty… deliciously pretty. 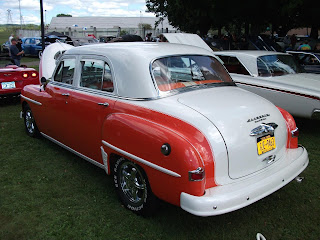 “It’s the color combination!” I told my wife. What a great choice of colors it showed... in two-tone orange and creamy white. The old Plymouth wore the same, delightful Creamsicle colors that made me chase after the ice cream truck though late summer doldrums years ago. My mouth began to water just by looking at the old Mopar.
Oh, don’t get me wrong… regular popsicles are still great. Popsicles are cooling ice for hot summer days, sometimes flavored like the tasty dark raspberry color seen on a late model Mustang that was parked nearby. But the Plymouth was delightfully tasty! It was the kind of orange color that made it worth carrying Mrs. Peterson’s groceries home to get a tip… one that would let a growing boy calculate a popsicle’s cost against ordering a Creamsicle. The drool the car caused at that show yet makes me remember pedaling my Schwinn bicycle on hot afternoons to deliver newspapers.., just so I’d have enough cash for a Creamsicle and a Royal Crown cola.
Ah yes! Memories bring back the taste. Now, this is exactly what car shows and classics are supposed to do! Even better, the car was colored in so much orange and white both inside and out, that you’d get a little sweet-sick if you looked at it too long. It seemed that my wife and I gained a few pounds of body weight just looking in the window. In doing so, I remembered impatiently waiting to lick a Creamsicle’s orange coating away to get the soft vanilla at the center. And then there was the popsicle stick! I would lick the vanilla ice cream from the stick and chew on the wood until my tongue got splinters. 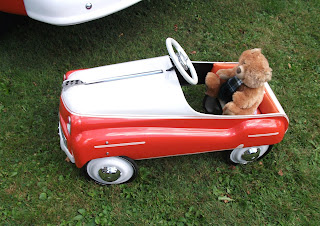 Near the rear bumper of the four-door family sedan sat a companion exhibit. To make the display complete, a similar period pedal-car was positioned sweetly. The little car was painted to beautifully match the Plymouth. Seated behind its steering wheel was a little “Teddy” bear. Together the cars were set like a sweet mother and following child… blessed to be really cool and moving slowly in a hot, busy world.

The spectacle of that car and the family thoughts it fostered made an impression on me. Those thoughts still remain. Being a churchman often wandering through car shows in the warm of summer, I thought of families who would gain a lot of togetherness by walking a car show. I thought of mothers…. and of little tag-along children. Had I the presence of mind and the car owner at hand. I’d have invited that display to attend an upcoming pro-life event.
In a few weeks many persons are planning to gather for a national “walk-a-thon”. That old sweet Plymouth would be a great attraction to park alongside this month’s protest against “Roe vs Wade” legislation. The march is planned to be held during the last week of January in Washington, D.C. Many folks from our Christian church denomination hope to walk along with others, in support of lives given by God to mothers and children... and especially those who are not yet born.
We walk for the life of babies that may one day sit in a county fair’s pedal car, or drive their parents dry-mouth crazy when they rip across the parking lot in a battery-powered toy Corvette. An event like the one we attend puts a good taste in a person’s mouth. We are called with new appetite to remember the generations of goodness that came before us. We can dream about such as the taste of a cool Creamsicle eaten on a hot afternoon.
If you have this taste for eating good things and doing right things… come out with us and participate in the “March for Life” on January 27th… or simply click on the call out at the right column of this page to donate to “Lutherans for Life”. May your assistance be rewarded greatly by our Heavenly Father.


May the Peace of God that surpasses all human understanding, keep your hearts and minds in Christ Jesus, our Lord.

Posted by TeeJay at 3:49 PM No comments: