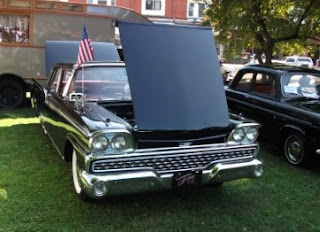 IN EARLY July of ‘59, I was planning to celebrate the 4th with hamburgers, roasted corn and watermelon. The echo of firecrackers and cherry bombs had already started. Everyone who had taken a long holiday vacation was already hyped. Even with all this, I had been busy that early morning throwing hay bales to feed the dairy cows where I worked. I had just picked up my favorite three-pronged pitchfork, getting ready to distribute the feed, when a phone call surprised me.
The old rotary-dial phone in the barn’s milk house almost never rang. Maybe that’s why the receiver blared its Ma Bell yodel loudly for at least a full minute before I ran in to pick up the call. I blathered a bit as I answered, not quickly saying in the mouthpiece what the official name of the farm was... in any business-like manner. I simply said, “Hello”.
On the other end of the line was my father. Dad said that he wanted me leave work for a while to go to a funeral viewing. He said that it was important. After he'd stated the time of the gathering, I took the wisp of Timothy hay from my mouth and used the stem to calculate on the wall how long it would take. Certainly, I had to go home, take a bath so I wouldn't stink of barn, and dress in something suitable to attend the viewing… and then get back to do the afternoon milking. Though I’d just flunked high school algebra once again because of missing too many school classes to milk cows, I figured that there was plenty of time to go.
I said, “Okay dad, where shall we meet.”
Arrangements were quickly made between us. We’d get together in front of the residence where the viewing was to take place.
Right at high noon, I stood somewhat sheepishly in front of the house as my dad drove up in a super-clean, black ’59 Ford sedan. The car still had a holiday US flag flying from the windshield antenna. Dad was dressed in a well-tailored suit that I’d never seen on him. It was his Navy uniform. My father had been a lanky sailor who had drowned my mother’s heart with love after his tour in WW2 was over. He stood tall when wearing his formal Navy uniform. It was firmly starched. The bell bottom pants were neatly pressed. His shoes sparkled. 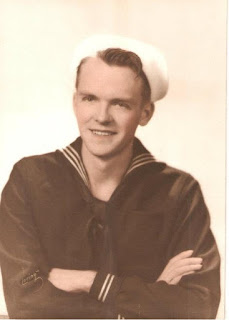 Once out of the car, he checked his uniform. Then, as soon as he came close to me, he sniffed. He wanted to be sure there was no cow manure smell that lingered. Dad then reached up and smoothed my hair. My father had dressed carefully, even somewhat religiously… before driving the car down from a funeral home in a nearby town. So he wanted me to look good as well. He said he was helping his friend who was the funeral director.
Dad said to me softly, “You might need to help carry the casket out of the house. There may not be a lot of people here. I think it might be a fine thing for us to do, since this young fella went to your school just a couple of years ago.”
Really? I said. He answered my puzzlement by telling me that the young man was a soldier who had been killed-in-action overseas. When dad mentioned the name, I immediately knew who he was. A few years older than myself, Kenny had graduated high school and entered the military in ’57. I only knew him by the car he had driven. His choice Ford two-door had been a regular at the fire company dances. His girlfriend Mary lived just across the street from the house where we stood helping to officiate at the funeral. Yes… I did remember Kenneth.
Certainly Ken was a well-known boy. He played on almost all the high school sports teams. To this day, I am amazed as I consider his marvelous intellect, since he held grades that would make a bottle rocket seem to fizzle. He was a trim guy who was always in great physical shape. He seemed determined to become more than an everyday hay chucker working a dairy herd. Indeed, Ken had worked very hard to stand tall as an Army Ranger. I admired him for that.
Admiration for him was what I felt as I attended that funeral so many years ago. It was hot in the living room, for it was early July. A small group of people had already gathered. They looked and nodded to us as we entered the room. The deceased young man was laid out as nicely uniformed, with a snazzy weaved rope laced around his shoulder. His uniform was sharply tailored and his chest was adorned with medals. Though his eyes had been closed by death, it seemed his firmly placed jaw still held a seriousness of military duty.
My father joined me in front of the casket to pay our respect. I asked, “Why did he die?”
“We don’t know much.” he responded. My father simply said, “He was killed overseas, shot by someone in a place called Viet Nam.”
I’d never heard of that mysterious place back then. As many can now attest, the years ahead would teach me. Within the next year I found myself also in military uniform. By happenstance, I served our nation in what was called a peaceful time. However, I know now better… that there is no such thing as a peaceful time. Our unit got fully involved in the Cuban Crisis.
I know for certain now… as the ‘60s rolled on, I occasionally remembered that particular funeral. I still recall it with a bit of pain. I thought about Kenneth when the bombers I helped to maintain stared down the hostilities raised against our nation during the Crisis. I remember today with my mind’s eye that weaved rope that was laced around Ken’s shoulders. Its threads joined together men and women who have served, some who had given everything for the defense of others. I think now of those who are woven and bound, and stand the wall even yet.
I know that my heart was struck at the time of the funeral, not by the somberness in the heat of the day, but by what seemed to be a lack of recognition. There was no official honor guard; only a few men like my father had come from the local veteran’s club. There was no twelve gun salute though firecrackers still popped. Kenneth was buried quietly in a grave far removed from Arlington, almost as if there was a power that did not want it known that he was to be missed.
I thought of these missing markers as I opened the Holy Bible recently to help finalize my study and preparations for a sermon. The message is to be delivered on this Sunday after the 4th of July. Maybe it was the reports of firecrackers that reminded me again of a great text containing the words of my Lord…

Those words reminded me to remember Kenneth here. I know that they were spoken to our Lord’s disciples just before he, even knowing what dangers lay ahead, prepared to go to Jerusalem. There he was to be crucified. The difference between Jesus and Kenneth, however, is that Jesus was completely without sin. Most of all, Jesus knew beforehand that he would be killed. Still… he went.
By doing so, the sinless Son of God known to us as Jesus the Christ, showed us that he is certainly the Way. According to blessed John's gospel, who made the record of our Lord’s speaking, Jesus chose his path of personal sacrifice. He demonstrated the cross as the way for us to get into the heavenly rest. It was a path set down by his Father that has since been marched, either deliberately or inadvertently now by many of God’s servants for several millennia. Jesus sacrificed his life. His death paid the penalty for those faithful who cannot but painfully live and die while doing war. 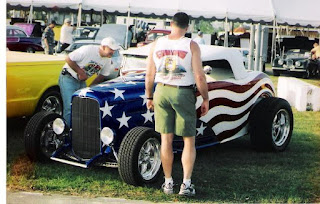 Today then, even as the smoke of holiday celebration rolls up to heaven in this wondrously free land, I offer thanksgiving for Jesus’ footsteps trod to the cross. I can’t help but think of military uniforms. Miraculously I am reminded of that rope woven of pure love that Kenneth wore in death. That rope ties the good and brave together. I stand reminded that very likely… when the roll of salvation shall be finally called… faithful young Kenneth will be there.

Please be invited to watch this video...

Blessings to You and Yours!