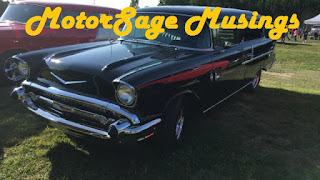 A LATE night fog slowed progress. I drove home from a distant church meeting. Each time the fog rolled in I tried to use the high beam headlights. The mist would glare back, so that only low beams would allow me to wend my way. Occasionally, I could not see through the clouds at all. I kept stepping on the brake, but the fog’s swirling made it look like the car was still rolling right along. I opened the driver’s door and looked down. The car had indeed stopped. Then rolling slowly forward with the door’s interior light shining on the roadway’s double yellow line, I felt pressed. Remaining there stopped in the road was not an option… for fear of another driver crawling up behind me. I was tense in the darkness, but kept going. By the time I could see and arrived at my hometown street it was close to midnight.
I rolled up my street toward home and became aware that a glow highlighted a garage doorway in a house located about three doors before my own. Knowing the gear head that called the bi-level place his own, I knew that I’d likely find Nick beneath the hood of his favorite project. Sure enough, the door to the garage was wide open. 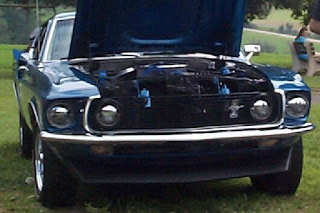 Dressed in a NASCAR tee-shirt and droopy jeans, Nick was draped over the engine housed beneath the open hood. Plenteous fender covers protected the deep metallic blue paint on his Mustang. Engulfed by the V-8 beneath the hood, he worked intently on the ignition system.
The engine was beautiful. Tasteful appointments of stock and aftermarket baubles accented two chromed, custom rocker arm covers. A tricked out high-performance 4-bbl carb nested nicely on top of a hi-rise aluminum manifold. I knew from previous conversations that the manifold sat ever so lightly between cylinder heads that had been ported, polished, relieved and tulip valve matched by Nick for maximum air flow. He had built this engine over the period of a year, with countless hours of exacting and painstaking work.
Indeed like the rest of the car, most work in the engine was done personally by Nick. Several years of late night hours had formed his gorgeous set of wheels, given as a hand-me down Ford from his father. He had given the car to Nick while the boy was in high school.

Out of the Mist!
“Watcha doin, Nick?” I asked.
Deeply committed to the task, he didn’t even look up to see who it was.
Apparently recognizing my voice, he said, “I just reworked the distributor. It had a bit too much play in the shaft bushing, so I thought I’d do the whole job once over. While in there, I re-curved the stock centrifugal advance and shimmed the vacuum advance at the speed shop last week. Now I’m dropping the whole works back in.”
Nick then straightened up from the old couch cushion that supported him, keeping his weight off the radiator housing. He wiped his hands with a shop towel, though not a spot of dirt could be found anywhere in the engine bay.
A tall young man in his late twenties, Nick looked eyeball-to-eyeball with me as he stood. With a “Pfft”, he blew dark hair back from his brow and said, “Reverend, I had to index and reseat the distributor to the oil pump drive rod again, so I though it should get another shot of oil to the crank and bearings before I fire up this old snake.” 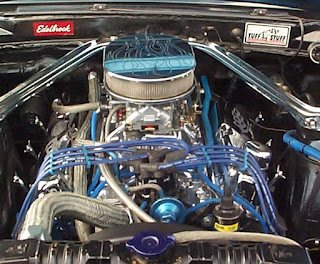 I nodded, knowing that using an electric drill and a home-made adapter rod, Nick could work the pump until engine oil pressure showed on the dash gauge. I also coldly noted his rather official “Reverend” reference to me as his neighbor, and the pet name “snake” as he spoke about his project car. Though in the past he said that he knew the car wasn’t a “Cobra”, he treated the Mustang like he was a fluted hypnotist entreating his king snake into a wheel stand. I wondered many a time about whether he was the one being hypnotized. Often, on late summer nights, it seems the snake played the flute.
“How are Jennie and the kids?” I asked quietly, thinking that I’d better keep our voices low or I’d awaken the sleeping home.
“They’re okay I guess. Jennie has the girls with her down to her parents in Atlanta. I haven’t talked to them for a while.”
“Oh, when did they go?” I queried.
He wiped the bent wrench especially angle-made for tightening the Ford engine’s distributor clamp bolt. And without looking up from his task, he said… “They’ve been gone more than a month” He paused a bit… “I don’t know when… or if they’ll come back.”

I thought for a minute or two about what he said. Then I asked, “Is there a problem, Nick?”

He shrugged a little. “Yeah.., I guess. Jennie says she’s going to stay there for a while. She said I don’t spend enough time with her and the girls.”
He bent over the engine again and started putting the distributor cap in place, turning it slowly so to index it properly.
“I’m home all the time. It’s not like I’m going out to a bar or clubbin’ or nothing like that.” He then continued, “I’m always out here in the garage every night. She knew where to find me.”

Usually reluctant to comment casually on marital troubles, I stood trying to do what every friend should do… just listen. But somehow.., what he’d told me was just like that little lifter click people would sometimes hear beneath the forward portion of the right valve cover on a 455cid V-8 Olds. Hearing it, I’d asked myself while listening… is it just a bit of dirt, a bad lifter, a rocker, or is the whole train starting to wobble?
So boldly I asked… “Nick, when’s the last time you went anywhere on a date with your wife… just the two of you?”
“I took her to the movies over Thanksgiving.” he said.
“That’s many months ago. And you both sat there watching the screen, I imagine.., not talking. Did you go somewhere together to talk afterward?"
Hearing no answer as he clicked the cap’s metal snaps in place, I continued, “I’m no marriage counselor, but it sounds like you folks could use some alone time to talk and share.., every week.”

You Are Reading An Excerpt From My Book... Check it Out!

Without waiting for an answer, I quickly said “Nick, when’s the last time you took the girls to a car show?”
He looked up from trying to figure the firing order of the plug wires. He said, “They’re girls. What would they get from a car show?”
“Lots!” I answered. “My wife goes to shows with me. She, the one who is always shopping, tells me which car she wants. My daughter munches hot dogs, drinks soda and takes pictures of bumpers, hubcaps, and any cute animal hood ornaments she sees. Best of all, we get to bum around, have fun and spend time together.”
“I spend time with my family right here,” he returned.
I then struggled to find the right words. “Nick.., please don’t continue to make an idol out of this car. It’s not a god, but it sounds like it does take away your time and energy from your family. Maybe you need to think a bit about some priorities.”
He straightened up slowly. He kept looking at the engine for a long time. I thought he was getting angry. Finally he said, "You know Reverend, the fog is nearly gone. Your timing seems to be just about right.”

May the Holy Spirit Guide You Over the Hills and Through the Dips!

Posted by TeeJay at 3:15 PM No comments: