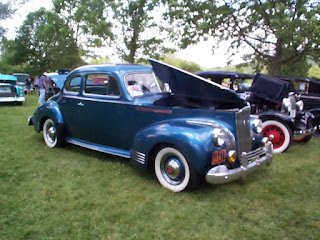 GREY CLOUDS skidded coldly across the white sky over the garage as I drove up. During that late Sunday afternoon in February, snow was forecast... but I’d picked that time to visit. By leaving home I’d avoided a TV hand controller fight with my wife. She insisted on watching her professional basketball game. I didn't like watching basketball much, so I did the wisest thing. I went out to visit Mike.
Mike’s garage is a warm and welcome place. It's located in the back yard of his house. In times past, the shop was a barn that housed a small dairy herd. Mike had inherited the farm and the tasks of his dairy farming father. The trouble was… though he loved the farm, Mike didn’t like cows. So he sold the cows, raised some hay... and started a business selling car parts and tools.
As years went by, he collected parts for old cars. Then the car collector passion struck him. It came on fully when he retired and bought an old Packard. A “light in the darkness” so to speak, the Packard now resides in one bay of his hay barn.
The two-door is warmed by a wood stove, and attended to by an ample tool bench and neighboring bar stools. A visitor can settle down for a visit in the barn, alongside the old Packard, for a sweet afternoon.
After entering the shop, I saw that a couple of safety stands held the old car’s rear axle up high enough so that Mike could crawl under the right running board. I peered back into the garage from the doorway and could see two work boots pointed heavenward.
“Mike, is that you under there?” I said as I saw his feet pointed skyward beneath the car.

I waited for an answer coming from underneath.No answer came. I took a couple more steps up alongside the graceful fender. From there I peered down at the well-worn workman’s boots.
“Mike, are you okay?” I said quietly.
I listened; then heard the sound. The low rumble echoed out like a Harley V-twin backing down the long hill into the valley, then a few snorts occurred like the bike had the muffler baffles blown out.
I got down on my knees and peeked beneath the car. A shop light was on, glowing a yellowish tinge that only heavy duty bulbs can emit. The creeper headrest was up. Mike was laying there… sound asleep.
He looked restful, snoring with his reading glasses perched between his nose and his white mustache. He had a hand-written wiring diagram sitting on his chest. In his right hand was a electrical test light, with its probe end hung around a black wire that routed toward the rear axle of the old car. It was that he’d naturally fell asleep amid a voltage test. His arm rested gently on a cross member bracket and his finger was on the trigger ready to insert the tip and probe the wire. He's not pulled the tester’s trigger. So here they were... resting together.., an old car and its wizened caretaker, born in the same year of Our Lord.
I thought about kicking his boot sole to wake him, but decided against it. That’d been done to him many a time, and he’d gotten a bandage on the top of his bald head each time that he’d snorted awake.
Since Mike was in no mood for work, I nosed quietly around the shop… waiting for him to awaken. I checked out the four new wide whitewall tires he’d shipped in from a warehouse in Tennessee. Mike had waited quite a while for them, so he’d be ready for an upcoming car show.
Mike sputtered slightly beneath the Packard, but was still backing the bike down the hill... so I thought I’d just leave and come back another time.
I walked out to my car and saw that the approaching darkness brought the onset of more cold and snow. A few flakes rested on the hood of my old Chevy truck.
Then I smelled them.
I knew what they were. There was no mistaking the smell… Welsh cookies!
Mike’s wife Betty was in the kitchen making my favorite dessert of all time! Having less shame than a street rodder caught in a classics show, I went to the back porch of the house and looked into the kitchen.
Betty stood over a hot griddle on the stove. In the soft light shed from over the old sink, this tall and graceful woman held a spatula up alongside her gray hair. She was singing a long forgotten hymn that I thought had died with my grandmother. “I walk in the garden alone…” went the tune. Betty held the key much better than my grandmother, but I knew their recipe for Welsh cookies was identical… at least they tasted as much.
Unashamedly, I knocked on the door… though I had been often told that a knock wasn’t needed.
“Come on in!” she piped between stanzas. “And he walks with me and he talks with me, and tells me I am his own.” she continued.
I came in and she smiled and without missing a note, then flipped some cookies on the griddle.
“How’ve ya been?” she asked after stopping her song.
“Good”, I returned. “I was just out in the shop and smelled the cookies.”
“Mike is snoozing, ain’t he?”
“Yes, he is.” I said.

She smiled a little, and said… “He’ll be coming in shortly, it’s almost four o’clock and the last cookies are just about done.”
A rumble of a Ford flat head V-8 and its side lake pipes rattled the window above the sink. I heard the car pull up outside. Betty peered out the window, saying… “That’s Jessie, she brings that old car home before any snow gets on the road. It’s a bit too low for country roads, let alone any snowfall. Why Mike dropped that Ford down that low for her, I’ll never figure.”
Jessie pulled her car up in front of the barn door, at the bay next to the old Packard. She woke Mike with a cold blast of air when the door lifted in answer to her push button control. Soon, with the tools put away and lights put out, the two… both father and daughter, came through the darkening light to the kitchen door.
“Take those greasy coveralls off!” Betty barked curtly.
Mike complied, as I would… given the reward of Welsh cookies hanging sweetly in the air.
Betty sat us down at the table, and dished out some home-made chicken soup. She said to me, “If ya want the cookies.., eat the soup.”
We said thanks to God and ate. Each spoonful of soup, though tasty indeed… was torture for me. Home-made chicken soup was only given at our house when we had a cold. I thought... “I’d really stopped in for the cookies.” It was like I had to think about the bad, before the good was going to be offered up.
Finally they came. A small porcelain plate with a picture of the church in the center was placed before me. It held the near perfect Welsh cookies.., near perfect, because instead of lard...butter made them a bit healthier as they cooked with the right kind of currants.
Three cookies were given to each person. They were done just the way I liked them. We ate, and drank coffee that you could cut with a knife. We laughed.., and we talked cars. I worried a bit about the strong drip coffee I’d just used to wash those cookies down.
“Would it keep me awake all night?” I thought. “Was it decaf?” Somehow it didn’t matter.
Betty left for a few minutes, then reappeared in the kitchen with her coat and hat secured. She said, “Let’s go, we’re going to be late.”
Mike looked at me. “You’re coming, right?”
“Where?” I asked.
“To the hymn sing, silly.” Jessie said.   “Mom is leading the gospel choir tonight.”
It’s amazing what good friends and good cookies will cause. A change of plans formed in my mind. We all loaded into Mike’s everyday beater and motored over to the Christ Chapel. We sat in the glow of the flame shaped bulbs nestled in candelabras. Beneath those trinity lights in the chapel… we heard stories from the bible about Jesus telling of the light of God’s love. And we sang music that rooted me to the pace of an old foot pedal organ and some old time religion. I listened intently to the sweet voices of the small choir accompanied by the organ, a flute, and a flattop Gibson guitar.
I remembered those words that Betty sang with the choir as I drove my old truck home that night. I caught myself humming them over the rhythm of the small block eight.  I’d heard them before from my beloved Grandma Jacobs as she washed dishes. With a faded soprano she’d sing… “And the joy we shared, as we tarried there, none other... has ever... known.” For some reason which I’ve just begun to understand, she’d then wipe tears from her eyes using her apron.
The words came written as those of Mary Magdalene meeting Jesus in the garden after his Resurrection. As I think of it now in my mind’s eye, I can see Mary standing there confused, for Jesus said “Do not hold onto me”. She was alone, like my Grandma after Gramps had died, looking for a sure and certain hope.
When Mary saw Jesus, she didn’t recognize him at first… for no one had died and ever came back. But there Jesus stood. Even though not understanding, she surely must have felt shocked, but loved... and reassured. She must have felt as grateful as I did, when after the dishes were done and I’d help. Grandma put them away. Gram would say... “Child, it’s time to read scripture before bedtime. Would you like some Welsh cookies and milk?”
You know... when I consider the taste, I guess they were a heavenly communion of sorts.