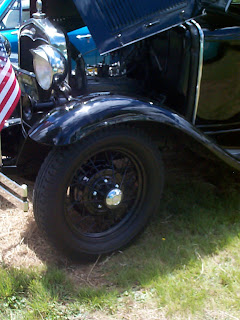 OUR Lord used parables to illustrate the kingdom of God to the disciples and others who would listen. But I've noted that these treasures are dated and difficult for those not acquainted with farms, forests and such as they were delivered in an ancient society. I wondered what this medium of communication would sound like if told today. Maybe like this...
The kingdom of God is like a woman who delivers meals to the homebound each day. One late hour she heard a thump, thump, thump as she drove. She stopped, and soon found that she had run over some devilish item on the road, for a left rear tire was flat. Being industrious, and knowing the task for her father had taught her duly, she began to change the tire. Just as she removed the wheel, a large black truck roared past and she stepped to avoid being struck. The hubcap holding the lugnuts flipped beneath her foot and the fasteners rolled into the storm drain and were soon gone. She heard them plop downward one by one, away into the cavern below.
Beside herself, she stared at the drain, cursed the truck, and knelt with her head against the fender. Then she looked heavenward for help. Just as she began to utter the words of her prayer, a tiny bell rang out. It was a bell on the handlebars of a tricycle ridden by a young child watching the scene.
"Can you go for help" she asked, even while knowing the neighborhood was less than desired."
"No..," the child said, "...you can fix it yourself. Just learn more to share."
The young woman smiled at the apparent impertinance.
"Oh really... how?"
Take one nut from the other three wheels to fasten the fourth, and go on your way. "Go slow and pray, but be on your way."
Let those who can hear listen to the child, for of such is the good news in the kingdom of God.
Posted by TeeJay at 2:45 PM