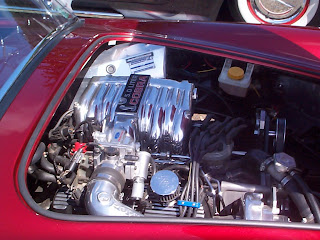 AN EXAMINATION of automotive news this week revealed to me that yet another of the entrepreneurial efforts of the President of the United States' ecological investments has gone belly up. The Fisker electric automobile manufacturer in Norway is ceasing production of its sports car. The vehicle, which I shall pejoratively call the Fisker Flounder, shall not be a part of our picture for an ecologically pure, motoring future. Deletions from a future marketplace, though I deemed this as predictable, heightens our thoughts about future dialogue needed. These are discussions that should be taking place within an ecological crisis and lessening of non-renewable fuel supply. This latter couplet is due to continuing subjective ethics within modern technological, industrial societies.

I tender that recent discovery of large deposits of shale oil in Canada and the US, and their development have spurred great disregard within the transportation and energy distribution industries, slowing progress toward developing long term clean, cheap alternative fuel technologies for society. This matter should be cooking on the front burner of our modern stove, whether the stove is electric or hydrocarbon burning.
In the electric car or hydrocarbon fuel dilemma, some technologically-challenged but lobby-influenced politicians went with big spoon toward financing electric car developments a decade ago. If these bottom feeders had only gone up the supply food chain they would have eventually arrived at electric power resources that also have predominant operational basis in non-renewable, hydrocarbon productions. I fear that when we get to the bottom of the hydrocarbon pot, which we shall certainly do in future generations, shortages of energy supply will still trigger world-wide chaos.

A Broken Pot?
Thus a marked decline of interest seems now expressed for such as hydrogen as automotive fuel. This fuel bubbled downward in research interest since recent years. The energy taste is thus salted though hydrogen as fuel for many prime movers is abundantly available in nature, can burn efficiently in automotive engines, and provides adequate vehicle power with only water vapor as its major exhaust by-product.
As well, hydrogen sourcing does not impact negatively upon Third World agriculture. I ask then, why the declining interest in doing research on this readily available and clean fuel? We already have vehicles, aside from high-tech hydrogen consuming fuel cell electric cars, that will burn this clean and renewable fuel in combustion engines. It is published fact that within the last decade, BMW marketed a vehicle that would run on either gasoline or hydrogen fuel. As well Mazda, of rotary engine fame, has built wildly successful hydrogen-powered rotary prototypes that go “Hmmm…”
The bubbling pot remains, however, though present methanol and ethanol fuels are known for high levels of alehyde-based air pollution, and negatively impact the agricultural scene of sugar cane producing Third Word countries... resulting in known competition for food producing acreage to feed the Third World's poor.
We note also that recent political conversations have been derogatory concerning promoting other bio-fuels. Within the last decade, profound advances have been made in the southern US, in the production and refining of algae-produced hydrocarbons. One of the higher agendas of the present government’s administration has been toward development of this potential. When fully developed, within a decade, farms could be established which convert sunlight into hydrocarbon fuels using this beneficial bio-tech research. Yet I hear derogatory comments coming from the political realm. I even admit that some of these blasphemous comments come from my own party allegiances…likely financed by the thickening starches of lobbying donations spewing from present fuel suppliers.
Why the reluctance to promote and invest in this promising technology? At this point in time, I can only offer that the recent, profitable fracking frenzy fills the need for viable fuel for a near future. Additionally, the cost of refining this fuel remains less than research for the alternatives. Combine this with bio-hazard warnings that are politically squelched, though nearness to a fracking site may deliver a tap water smelling like a pungent sauerkraut boil, you are left with a recipe for future disaster. My present guess, therefore, is that reluctance to get us past this technology rests in the arena of profitability. Money seems the root of all fuelish evil.

Taste the Stew!
Consider that bio-fuel emergence would lower existing fuel demands, and change the price of these naturally-produced oil products, thus making recent infrastructure investments in hydrocarbon gaseous and liquid fuel production as moot. As well, the expenses associated with converting our societal fuel infrastructure to gaseous hydrogen would also impinge large corporation profits. Any competent chemical engineer can relate that dispensing of gaseous hydrogen requires quite different handling, shipping and pumping equipment that is now present in our liquid fuel transport industry. You can see that profitability in such delivery methods as the proposed Midwest pipeline would be less certain. In other words, the economic forces at work in our present day, make a profit by continuing and developing ecologically harmful technological structures within the multi-national industrial complex. They wish to simply expand traditional fuels and improve distribution methods. By maintaining such patterns, these economic powers sacrifice our life quality for many generations to come, unless they begin to regard present energy delivery infrastructure as stepping stones toward cleaner and more sustainable fuel supply. 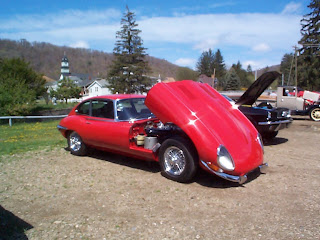 Theological Thoughts!
Two commandments thus lift my hood and boil my cooker today. As a Christian, my calling is to first love God, and also love my neighbor. Both are dependent on my listening to the voice of the Holy Spirit, given to me through the power of revealed scriptures. In this, I must refer first to the Law that condemns us. In these I find that we are convicted in our consumptive guilt of God’s gifts in creation. We are like a household scourge who simply sits at table as the pot grows lean, bellowing “More meat!”
My opinion is that technological powers within the modern world are not guided by a stable, transcendent social ethic. Any ecological attitude now extant within the corporate operates in a subjective system of profit, based tenuously within wide and changing multi-national legalities. These are often far removed from true, ecologically-responsible values. It is, therefore, my proposal that this abysmal lack of a transcendent, ecologically sound ethic should be addressed by the Christian church. One of our mandated instructions from Jesus Christ was to love one another. To do this task of love properly, therefore, we must include the welfare of those in Third World nations, and our own generations to come.
We in the church are called to engage the scientific and technological communities in ethical dialog. If these powers in society refuse to embrace said dialog, as offered for the future good of all, it should cause the whole church to condemn these reluctant powers. This should be done through the focus of Divine Law upon harmful technological deeds or lack thereof.
We are thus admonished by the Decalogue to work for our neighbor’s good. While surely delivered from condemnation by Christ’s sacrifice on our behalf, we are yet called to preserve life… to go and sin no more. We are to love society toward God’s formative future. It is our task now to challenge the many devils of corporate reluctance in the public square.
In the “household” of God, therefore, a word which comes from the Greek “oikiomene” or “economy”, I say that this matter can no longer be spooned into the garbage disposal of church history. We shall not find our talents hidden there. In future conversations, whether soft or harsh, let us move from the Law toward the fruitfulness of the Gospel… the good news of a warm and mobile future in Christ Jesus.